Sale on canvas prints! Use code ABCXYZ at checkout for a special discount!

You are my butter half. 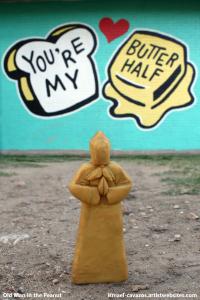 Greetings from Austin, Texas. You are my butter half!

Namaste, the Sage of the Leguminati.

V I P Face in the Clouds 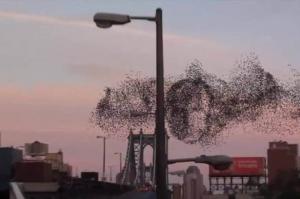 News agencies are all over the place as to who this face Resembles. What do you think?
A. Steve Jobs
B. Robin Williams
C. Marlon Brando
D.Donald Trump
E. Vladimir Putin

This face is a still from a video shot by Sheryl Gilbert as she was visiting New York with her family. She captures birds flocking when suddenly a face is formed in the undulating pattern.

A Face in the Tree 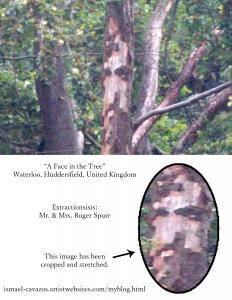 Mr. & Mrs. Roger Spurr debate if this tree looks like Denis Kilcommons or Jesus. You decide.... 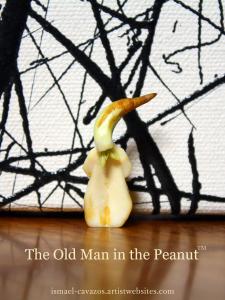 Water is life. Check out my greenish beard and elongated hood! This is the result of germination in water for three days as I slowly transform into a peanut plant. If you didn't get the implication - I AM TRULY ALIVE!! 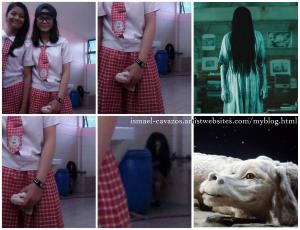 This story is getting picked up because of a Resemblance to a scary apparition hiding in the corner but I noticed that there is also a lucky dragon here . . . it is Falcor - in the girl's hand!

"Students taking a photo in the toilets at Rizal High School in the Philippines were shocked to find a mysterious figure in the bottom right-hand corner of their shot. The Isidro Rodriguez Building has been haunted since the 1980s. Apparently other students have also reported ghostly goings on, and the school is considering having the building blessed in an attempt to deal with the issue." 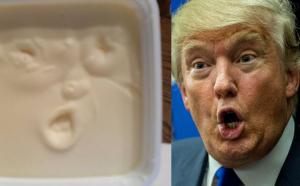 If a news agency covers the art of Extractionism and the artists who Recognize the Resemblances, you can bet you will see it featured here:
Trump is Buttah! A woman in Missouri has found Donald Trump’s face in a tub of butter. Jan Castellano of Wildwood sent the picture to her local TV channel, KSDK, after Recognizing Trump's likeness in a package of Earth Origins Organic Spread.

Most Astronomers are also Extractionists

Astronomers are often brilliant Extractionists! This amazing article by Joe Rao really explores the idea of Recognizing Resemblances in the stars above:

"Out of the 88 star patterns that are officially recognized as constellations, Sagittarius may be the one in which you can see the widest variety of forms. And all will be on display this week, when Sagittarius appears low to the southern horizon a couple of hours after sunset.

Although tracing out an Archer-Centaur among Sagittarius' stars does require some imagination, visualizing it as a Teapot is quite easy. In fact, it is the Teapot and not the Archer that is usually portrayed on most star charts and in observing guides. I often wonder, who was the first to visualize these stars as resembling a teapot? It does not appear in any astronomy guides or star books prior to the early 1930s. I myself find it a truly delightful pattern: As star pictures go, it's one of the best.

During the 1970s, the late astronomy popularizer George Lovi (1939-1993) pointed out that we could augment our tea service with a teaspoon and lemon as well. Lovi's "teaspoon" comprises stars in northern Sagittarius, while his "lemon" is an alternate rendition of the nearby Southern Crown." 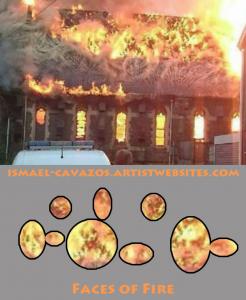 A photograph of the inferno which devastated a Llanelli church two nights ago has attracted widespread attention online for a seemingly supernatural reason.

The picture, taken by Robert Davies on his phone, shows flames engulfing the roof of Park Church with smoke pouring out of the windows.

However, many people who have seen it online claim they can see images of faces in the flames.

This sparked claims it was photoshopped on social media, Mr Davies rebuked the accusations and said: "It is 100 per cent not photoshopped!

"I took it on my phone and uploaded it to Facebook straight away."

In the photo, I found 6 faces and 3 sets of eyes. How many do you see? 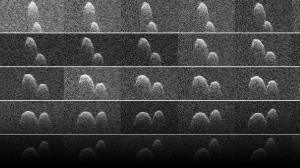 There are 'peanut asteroids' flying around in space!

"Radar imaging has shown that about 15 per cent of near-Earth asteroids larger than 600 feet, including 1999 JD6, have this sort of lobed, peanut shape," said Lance Benner of NASA's Jet Propulsion Laboratory in Pasadena, California, in a statement.

NASA scientists have captured a peanut-shaped asteroid that approached close to Earth last weekend. The next time an asteroid will approach Earth this close will be in 2054.
On July 24, the asteroid made its closest approach to Earth at a distance of about 7.2 million kms, or about 19 times the distance from Earth to the moon.